The birth of a butterfly - Guseva Yekaterina Yevgen'yevna 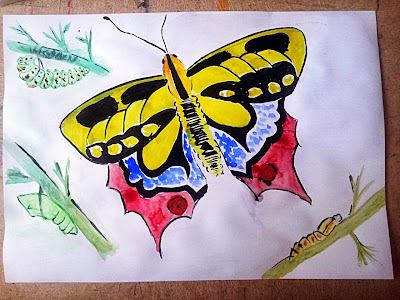 NAME: Guseva Yekaterina Yevgen'yevna
COUNTRY: Russia, City Naberezhnye Chelny
SOCIAL MEDIA: https://vk.com/id111645040
TITLE: The birth of a butterfly
TECHNIQUE: watercolor
YEAR: 2015
PUBLISHED: No
DESCRIPTION: According to most people, a butterfly - it's one of the most beautiful insects in the world. The history of these lepidopteran insects begins back in the Jurassic period to the present day, the detachment of butterflies can count about 157,000 species. And surprisingly, the representatives of this group of insects inhabit, except Antarctica, in every corner of the globe. Butterflies - it is an amazing and unique insects, affects a variety of groups and delights. But the most interesting to see how a butterfly is born.

The life cycle of butterflies can be divided into four stages: egg, caterpillar, chrysalis, butterfly. From the egg comes a caterpillar, which is by its nature very gluttonous, because she needs to collect as many nutrients for the next three cycles. Just coming out of the egg, it eats its shell and then starts eating sheet on which was attached an egg.All the cycle track that does is eat, so it grows quickly. During its growth, several times the caterpillar sheds its skin, that is shed. Some species of caterpillars increase your weight in a few thousand times and molt 4-5 times during their life cycle. After molting at Larvae pupate (it turns into a pupa). Silk thread attached (spun off from the abdomen) to the plant, caterpillar, tripping over her hind legs up in the air. Pupation occurs.Metamorphosis (complete conversion) occurs at all stages of the life cycle of the pupa. From voracious caterpillar who cared only about food, there will be offspring manufacturer - butterfly. But
the doll itself is vulnerable because it does not have the ability to crawl away from danger, or fly. That is why nature has taken care to disguise dolls, some species can not be distinguished from twigs or leaves, and many subtypes of many kilometers weave cocoons of silk thread in which the caterpillars turn into pupae. The life cycle depends on the type of pupa the butterfly, for some it lasts only a few days, and sometimes up to three years.
CATEGORY: Student
WIKIMEDIA COMMONS: No
Etiquetas: estudiant Il·lustraciència 3 Illustraciencia3