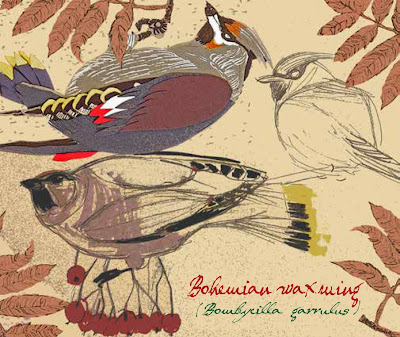 NAME: Joanna Machowska
WEB: www.jowhitefoxdesign.com
COUNTRY: Australia
SOCIAL MEDIA: Facebook
TITLE: Bohemian waxwings
TECHNIQUE: Pappercut, drawing,digital
YEAR: 2015
PUBLISHED: No
DESCRIPTION: The Bohemian waxwing (Bombycilla garrulus) is a starling-sized passerine bird that breeds in the northern forests of Eurasia and North America. It has mainly buff-grey plumage, black face markings and a pointed crest. Its wings are patterned with white and bright yellow, and some feather tips have the red waxy appearance that give this species its English name. The three subspecies show only minor differences in appearance. Females are similar to males, although young birds are less well-marked and have few or no waxy wingtips. Although the Bohemian waxwing's range overlaps those of the cedar and Japanese waxwings, it is easily distinguished from them by size and plumage differences.
Waxwings are primarily fruit eaters, but also consume insects during the breeding season. Mosquitoes and midges are the most common prey, but many other insects and some spiders are eaten. They are caught mainly by flycatching from an open perch, but some may be picked off vegetation.[19] Fruit is normally picked from trees, sometimes from the ground, and is usually swallowed whole.
CATEGORY: Professional
WIKIMEDIA COMMONS: Yes. As the author of illustration I have given permission for it to be loaded on Wikimedia Commons, Creative Commons Attribution Share Alike 3.0
Etiquetas: Il·lustraciència 3 Illustraciencia3 professional Wikipedia