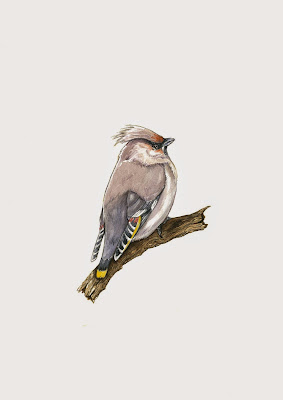 NAME: Sofia
WEB: Iori
COUNTRY: Italy
SOCIAL MEDIA: facebook
TITLE: Bombycilla garrulus
TECHNIQUE: watercolors
YEAR: 2015
PUBLISHED: No
DESCRIPTION: The Bohemian waxwing (Bombycilla garrulus) is an elegant-looking passerine bird named for beads of shiny red material on the tips of the secondary wing feathers. Waxwings have tapering crests (raised only in alarm) and sleek brownish-gray plumage with flecks of red pigment resembling sealing wax on the wings and a yellow bandon the tail tip and a black mask. They breed in northern forests of Eurasia and America and every few years irrupt far southward in winter. Females are similar to males, although young birds are less well-marked and have few or no waxy wingtips. Although the Bohemian waxwing's range overlaps those of the cedar and Japanese waxwings, it is easily distinguished from them by size and plumage differences. Both the Cedar waxwing (Bombycilla cedrorum) and the Bohemian waxwing (Bombycilla garrulus) are noticeable as they gather in large noisy flocks.
CATEGORY: Student
WIKIMEDIA COMMONS: Yes. As the author of illustration I have given permission for it to be loaded on Wikimedia Commons, Creative Commons Attribution Share Alike 3.0
Etiquetas: estudiant Il·lustraciència 3 Illustraciencia3 Wikipedia