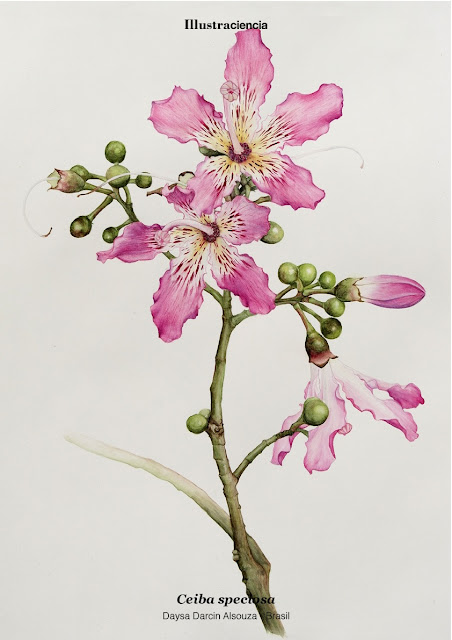 DESCRIPTION: This illustration shows a branch of the species Ceiba Speciosa flowering. This species belongs to the Malvaceae family and it is popularly known in Brazil as the "Paineira" tree, this plant is a native tree of South America and it is very common in countries such as Brazil and Bolivia.

Due to the flower's beauty, The "Paineira" tree is widely used as an ornamental plant. Also, the species is used for reforestation of devastated areas as it grows quickly.

Its flowering begins in mid-December and lasts until April. Also, the fruit ripens between the months of August and September with the tree completely stripped of foliage.

The fruits are green capsules which open and release some kapok that surrounds its seeds. The kapok is known in Portuguese as "paina" and it gives the name to the tree. The dispersion of the seed occurs by wind and birds which often use the fibres of the "paina" to line their nests.