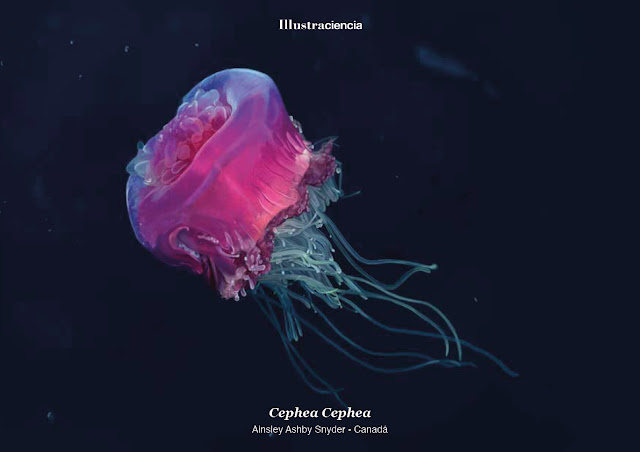 DESCRIPTION: Cephea Cephea is a digital scientific illustration created by Canadian artist Ainsley Ashby-Snyder. Through her use of a digital painting technique she portrays the depth, transparency, opacity and texture bringing to life the seemingly dormant life of the jellyfish. Although the Crown Jellyfish is an invertebrate it is an integral part of the ocean. This magnificent creature protects smaller sea life, as well as itself, by the use of its multiple round and sometimes wart like protrusions on the crown of its body as depicted within the illustration. The Crown Jellyfish, or sometimes Cauliflower Jellyfish is considered one of the few True Jellyfish and is highly sought after and eaten as a delicacy due to its beautiful pink and purple hues. Cephea Cephea illustrates the magical qualities of the Jellyfish while accurately and proportionally depicting its form and character.

WIKIMEDIA COMMONS: Yes. As the author of illustration I have given permission for it to be loaded on Wikimedia Commons, Creative Commons Attribution Share Alike 3.0
Etiquetas: Il·lustraciència 3 Illustraciencia3 professional Seleccionados Illustraciencia3 Seleccionats 3ª edició Wikipedia