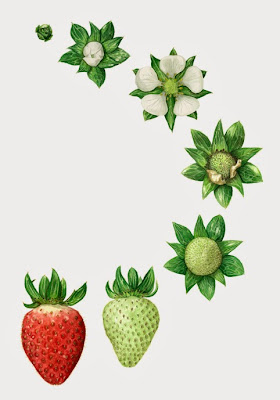 In the contemporary society, Fragaria x ananassa produces one of the most commercialized strawberry in Europe. The issue of this work was to illustrate the different stages of flowering and transformation to fruit of products that can often be found in supermarkets and shops. This information should motivate the consumer to learn about what he eats, knowledge that is being lost with the new society patterns. The illustrations were placed in posters and in a didactic book for children. The process of this work started with the analysis of different Fragaria x ananassa examples and registration of stages. Finally there was a selection of seven main ones. The technic used in this project was watercolour and some details in colour pencils.
CATEGORY: Student
WIKIMEDIA COMMONS: No
Etiquetas: estudiant Il·lustraciència 3 Illustraciencia3