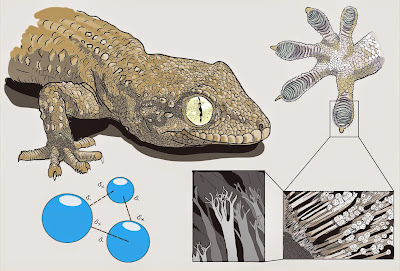 NAME: Matteo Gabaglio
COUNTRY: Italy
SOCIAL MEDIA: facebook
TITLE: Gecko's secret power
TECHNIQUE: Adobe Illlustrator
YEAR: 2015
PUBLISHED: No WHERE: Torino
DESCRIPTION: The drawing represent a Gecko (Tarentola mauretanica Linnaeus, 1758). Its aim is to show the structure of the gecko's toe pads, which allows him to stick and walk even on smooth surfaces. Gecko's adhesive secret is based on the hierarchical fibrillar structure of its toes: toe pads are made of lamellae, in turn composed of setal arrays (satae), futher subdivided in spatulae. Setae and Spatulae adapt to the surface, thereby maximizing contact points. This fibrillar micro and nanostructure, made of β-keratin, forms Van der Waals forces (a type of molecular attraction force) with the surface, allowing the gecko to stick even to the smoothest surface. Partial charges on one atom can induce a dipole in a neighboring atom. Van der Waals forces are created by attractions between opposite partial charges (δ+, δ-) of neighboring induced dipoles.
To detach, the reptile hyperextends its digits and scrolls up each toe pad by peeling in a distal to proximal direction. This hyperextension works also as a dirt and particule cleaner. It has been calculated that a single foot could sustain ~ 100 N force, enough to keep a gecko attached to a glass from only one toe.
CATEGORY: Professional
WIKIMEDIA COMMONS: Yes. As the author of illustration I have given permission for it to be loaded on Wikimedia Commons, Creative Commons Attribution Share Alike 3.0
Etiquetas: Il·lustraciència 3 Illustraciencia3 professional Wikipedia