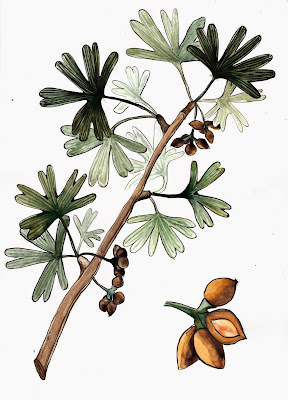 NAME: Zhevlakova Ekaterina
COUNTRY: Russia
SOCIAL MEDIA: https://vk.com/id41679487
TITLE: Ginkgo sibirica
TECHNIQUE: watercolor and ink
YEAR: 2015
PUBLISHED: No
DESCRIPTION: In the Middle Jurassic age Ginkgo sibirica was widespread in Siberia. Among the fossil plants of the Mesozoic, this plant is one of the most studied learnt today. During the life of Ginkgo sibirica was a tree up to 30 meters thick with a spreading crown.
Leaves Ginkgo sibirica were bundled at the tips of short shoots. The same short shoots can be observed in modern conifers such as pine or larch. The leaves are consisted of a rather long (30 - 60 mm) and a semi-circular or petiole shirokoklinovidnoy in outline of the leaf blade. The main feature of Ginkgo sibirica leaf is that its plate cut into two equal parts by medin incision which are cut sequentially so as to form a 4 to 10 blades. Ginkgo sibirica dropped their leaves in autumn.
The illustration shows a reconstruction of the branch Ginkgo sibirica.
CATEGORY: Student

WIKIMEDIA COMMONS: Yes. As the author of illustration I have given permission for it to be loaded on Wikimedia Commons, Creative Commons Attribution Share Alike 3.0
Etiquetas: estudiant Il·lustraciència 3 Illustraciencia3 Wikipedia