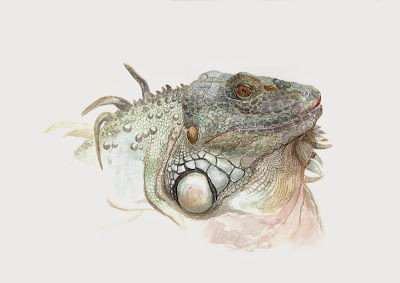 NAME: Sofiya Shukhova
COUNTRY: Russia
SOCIAL MEDIA: https://www.facebook.com/sofiya.shukhova
TITLE: Iguana iguana
TECHNIQUE: watercolour
YEAR: 2015
PUBLISHED: No
DESCRIPTION: And suddenly I saw it. In a blaze of sunlight, among the leaves, sat a creature out of a fairy tale. A great lizard, his scaly body coloured with all the various shades of jade, emerald, and grass green, his heavy head gnarled and encrusted with great scales, and beneath his chin a large, curving dewlap. He lay negligently across a branch, clasping the wood with his big, curved claws, dangling his whip-like tail towards the waters below. As we watched he turned his head, ornamented with its frills and protuberances, and started to feed casually on the young leaves and shoots about him. I could hardly believe that he was real, and I doubted if he was the same species as the dull, lethargic, greyish-coloured creatures which I had seen in zoos labelled as iguanas. As we passed directly opposite him he turned his head and gave us a haughty stare with his small, golden-flecked
eyes. (c) Gerald Durrell, "Three singles to adventure"
CATEGORY: Professional
WIKIMEDIA COMMONS: Yes. As the author of illustration I have given permission for it to be loaded on Wikimedia Commons, Creative Commons Attribution Share Alike 3.0
Etiquetas: Il·lustraciència 3 Illustraciencia3 professional Wikipedia