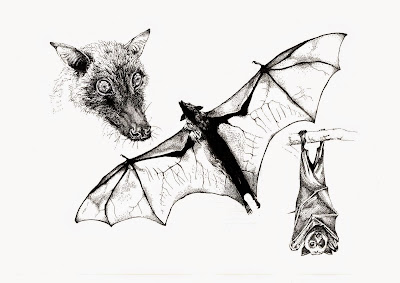 NAME: Aleksey Ulanov
COUNTRY: Russia
SOCIAL MEDIA: http://vk.com/katsuro_smile
TITLE: Large flying fox (kalang)
TECHNIQUE: Black inc
YEAR: 2015
PUBLISHED: No
DESCRIPTION: fruit bat, fruit-eating bat found in tropical regions of the Old World. It is relatively large and differs from other bats in the possession of an independent, clawed second digit; it also depends on sight rather than echo-location in maintaining orientation. The Pteropodidae, or flying foxes, are S Asian fruit bats whose short jaws and powerful teeth are specially adapted for piercing the rinds of tough fruit. They include the largest of all bats, the kalang ( Pteropus vampyrus ), which has a wingspan greater than 5 ft (1.5 m). The Macroglossidae, or long-tongued fruit bats, are widespread throughout S Asia, Africa, New Guinea, and Australia. Specialized for a diet of pollen and nectar, their snouts and tongues are greatly elongated. All fruit bats are highly mobile, traveling as much as 30 mi (48 km) in search of food. They nest in trees and all but a few species are completely nocturnal. Fruit bats are classified in the phylum Chordata, subphylum Vertebrata, class
Mammalia, order Chiroptera.
The Columbia Electronic Encyclopedia, 6th ed.
CATEGORY: Student
WIKIMEDIA COMMONS: Yes. As the author of illustration I have given permission for it to be loaded on Wikimedia Commons, Creative Commons Attribution Share Alike 3.0
Etiquetas: estudiant Il·lustraciència 3 Illustraciencia3 Wikipedia