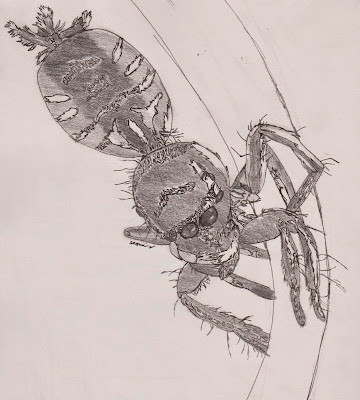 NAME: Stephen Cousins
COUNTRY: United Kingdom
SOCIAL MEDIA: https://www.facebook.com/antrhosc
TITLE: Maratus Sceletus
TECHNIQUE: Detailed Pencil Illustration
YEAR: 2015
PUBLISHED: No
DESCRIPTION: Maratus Sceletus is a new species of peacock spider that was discovered earlier this year in southeast Queensland. It's nickname is Skeletorus because the white markings contrasting with the black background of its body makes it look like a skeleton. peacock spiders have their name because of their bright colours and courtship rituals that resemble a dance. This species belong to a group of peacock spiders named Calcitrans, however unlike the four other members of this group this one is unique because it doesn't look like any of the others while they all look similar. The illustration here is a male Maratus Sceletus who is in the middle of its dance-like ritual. These types of spiders are usually a size of between three and seven millimetres. This illustration was drawn using a variety of pencils for the tonal aspect and a fine liner pen for the outline.
CATEGORY: Student
WIKIMEDIA COMMONS: No
Etiquetas: estudiant Il·lustraciència 3 Illustraciencia3