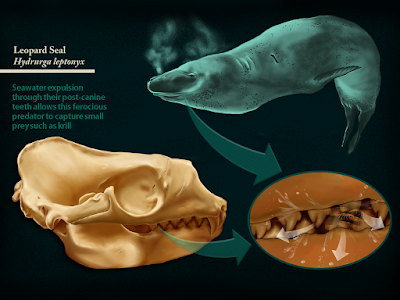 NAME: Alicia Isabel Guerrero Vega
COUNTRY: Chile
SOCIAL MEDIA: https://www.facebook.com/maliciastar
TITLE: Never too small for a big mouth
TECHNIQUE: Digital illustration
YEAR: 2015
PUBLISHED: No
DESCRIPTION: The leopard seal, the king of the Antarctic continent, is the only seal able to eat warm-blooded animals, they prey on penguins and even on other seals. But this ferocious predator also preys on krill. How can such a large mammal eat such tiny animals in an efficient way? Aren't their teeth adapted to eat large prey? Well, capturing krill is not a problem for them, because they use filter feeding, just like whales do! but the difference is that leopard seals use their back teeth as a krill sieve. Once the small animals have been drawn into their mouth by suction, they push the ingested water out through the small spaces between their post-canine teeth, trapping the tiny animals inside their mouth.
While the front teeth (incisors and canines) are used to catch large prey, the post-canine teeth are used as a filter for small prey.
So even for this frightening hunter, small treats are also part of the menu.

This picture is based on the following study:
Hocking D, Evans A & E Fitzgerald (2013) Leopard seals (Hydrurga leptonyx) use suction and filter feeding when hunting small prey underwater. Polar Biol 36: 211-222
CATEGORY: Professional
WIKIMEDIA COMMONS: Yes. As the author of illustration I have given permission for it to be loaded on Wikimedia Commons, Creative Commons Attribution Share Alike 3.0
Etiquetas: Il·lustraciència 3 Illustraciencia3 professional