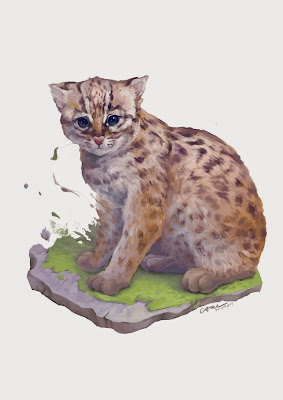 NAME: CHANG,Yun-Hsin
COUNTRY: Taiwan
SOCIAL MEDIA: http://carlchangportfolio.tumblr.com/
TITLE: Prionailurus bengalensis
TECHNIQUE: Photoshop
YEAR: 2015
PUBLISHED: No WHERE: Taiwan
DESCRIPTION: "Prionailurus bengalensis is a small wild cat of South and East Asia. Since 2002 it has been listed as Least Concern by IUCN as it is widely distributed but threatened by habitat loss and hunting in parts of its range. " -- WIKI.
There still have some prionailurus bengalensis in my country Taiwan, but now is less and less. The picture shows it's disappearing if we don't care about this.
CATEGORY: Student
WIKIMEDIA COMMONS: Yes. As the author of illustration I have given permission for it to be loaded on Wikimedia Commons, Creative Commons Attribution Share Alike 3.0
Etiquetas: estudiant Il·lustraciència 3 Illustraciencia3 Wikipedia