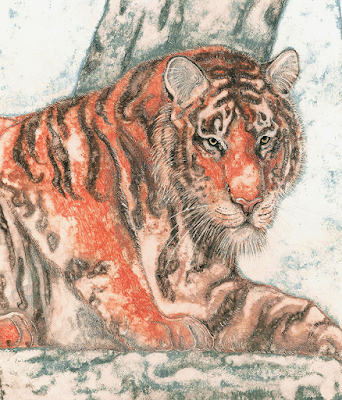 NAME: Makarenko Daria
SOCIAL MEDIA: www.facebook.com/dasha.makarenko.184
TITLE: "The Siberian tiger"
TECHNIQUE: Mixed method
YEAR: 2014
PUBLISHED: YES WHERE: behance.net
DESCRIPTION: I have chosen the Siberian tiger, the biggest tiger in the world, as the main character of my work. He is the only type of tiger, that can live in the snow. The fate of the Siberian tiger is very dramatic. But people killed almost 100 tigers every year in the end of 19th century. As the result, the Siberian tiger was on the brink of disappearing, because of an unregulated killing of adults, an intensive catching of the tiger cubs, deforestation near rivers, decrease of wild artiodactyls animals, because of uncontrolled hunt and other different cases. There was less snow in the winters too. The history of species shows the tiger as an easily vulnerable one, despite his big size and huge physical power. The tiger hunt has been prohibited since 1947. Wildlife sanctuaries for protection tigers were opened in Russia. The specie was listed in The Red Book. One of the most serious steps of WWF in Russia was the project of the preservation of this specie. All this actions
leaded to the increase of this rare type of the tiger. There are more than 450 tigers now.
CATEGORY: Student
WIKIMEDIA COMMONS: No
Etiquetas: estudiant Il·lustraciència 3 Illustraciencia3