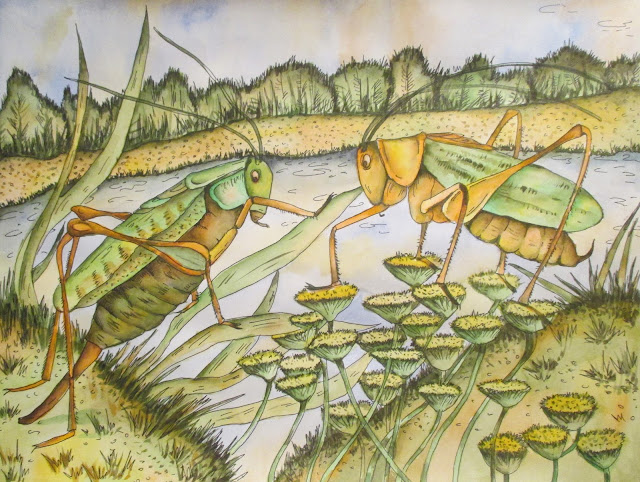 Descripción:
SINGING GRASSHOPPER (TETTIGONIA CANTANS FUESS.)
The grasshopper song is one of the most common grasshoppers in the forest zone belongs to the family of these grasshoppers. In Russia it is very widely distributed from the Western borders to Eastern Siberia. It also breeds in Western Europe. Since the end of July to late autumn in the forest glades and forest edges, in gardens and roadside plantings can be found singing grasshopper; perched on a high stalk of grass, a Bush of raspberries, and even on the lower branches of trees; the male chatters relentlessly, over and over again repeating his trill. He begins to sing another day, in the afternoon, especially active in the evenings, and ceases only late at night, in 2-3 hours. Sound machine, like all grasshoppers, is he on the elytra. Mnogofazny singing grasshoppers, as they eat the lush green grass or leaves, and various caterpillars, larvae, aphids, and can even eat the larva of their own species. Green color good song grasshopper hides from enemies. The species Latin name "cantons" translates as "singing, song"
GREY GRASSHOPPER (DECTICUS VERRUCIVORUS L.)
This large grasshopper belongs to the family of these grasshoppers and is widely distributed across Eurasia — from Europe to Kamchatka, from the Caucasus to Kazakhstan. Its color variety, can meet and green and grey and brown specimens are covered with darker spots. They can be found in dry meadows, forest glades, other open spaces, and sometimes in crops. Disturbed grey grasshopper flies quite far and plans to open the wings, and then again hiding in the grass. Unlike the grasshopper song he rarely gets sitting in high grass or bushes, prefers low grass or the soil surface. While the grey grasshopper is able to feed on insects and their larvae, it is more prone to rastitelnosti. Sometimes it is quite may harm agricultural crops. It has long been thought that if you catch a large grasshopper and let him take a bite of its powerful jaws the wart on the hand, she will never grow up. Forty years ago the village children this use of gray grasshoppers was a common thing