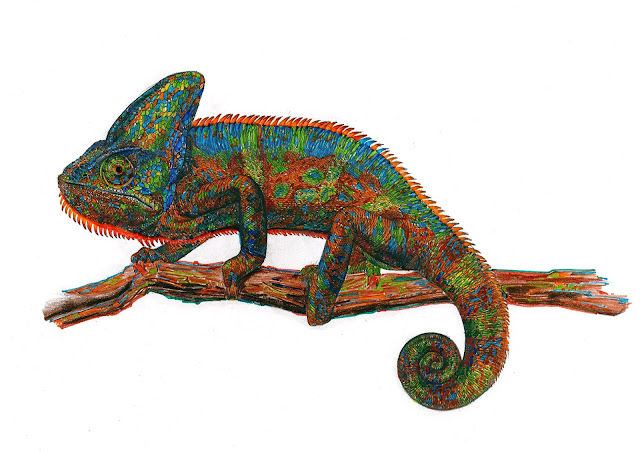 Descripción:
Chameleons are family of tree lizards. The Greek word "khamaileon" means "lion of the ground". Some species of it are able to change their skin coloration. Many people know them with this fact.
Color change in chameleons has functions in social signaling and in reactions to temperature and other conditions, as well as in camouflage. The relative importance of these functions varies with the circumstances, as well as the species. Color change signals a chameleon's physiological condition and intentions to other chameleons.
They have two superimposed layers within their skin that control their color and thermoregulation. The top layer contains a lattice of guanine nanocrystals, and by exciting this lattice the spacing between the nanocrystals can be manipulated, which in turn affects which wavelengths of light are reflected and which are absorbed. Exciting the lattice increases the distance between the nanocrystals, and the skin reflects longer wavelengths of light. Thus, in a relaxed state the crystals reflect blue and green, but in an excited state the longer wavelengths such as yellow, orange, and red are reflected.