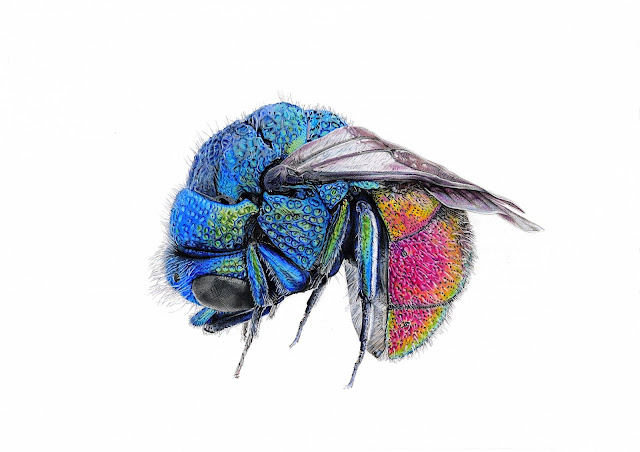 The Ruby-tailed wasp Chrysis ignita (Linnaeus, 1758) belongs to a large group of very similar ruby-tailed wasps. They have beautifully coloured exoskeletons, in metallic and iridescent blue, green and ruby. Despite such bold colors, these wasps are difficult to be spotted due to their very small size, that barely reaches 10 mm in length.
As a kleptoparasites they have a risky life cycle that always depends on another species. Chrysis ignita mainly parasitizes mason bees, infiltrating into their nests where they lay their eggs. When the wasp eggs hatch, the larvae use the host eggs and larvae as sustenance, as well as other resources that may be in the nest.
Laying eggs in the nest of another bee, which is armed with powerful stingers and jaws, is a dangerous task considering that Chrysis stinger has no other function than ovipositor in females. Still and all, they succeed thanks to their highly sclerotized exoskeleton and concave ventral surface that becomes an effective armor to protect themselves. This allows to tuck in its antennae and legs and curl into a defensive sphere impenetrable to the strongest stings and mandibles.
These solitary wasps can be found throughout England, Wales, Scotland, and Ireland, among other Palearctic regions.