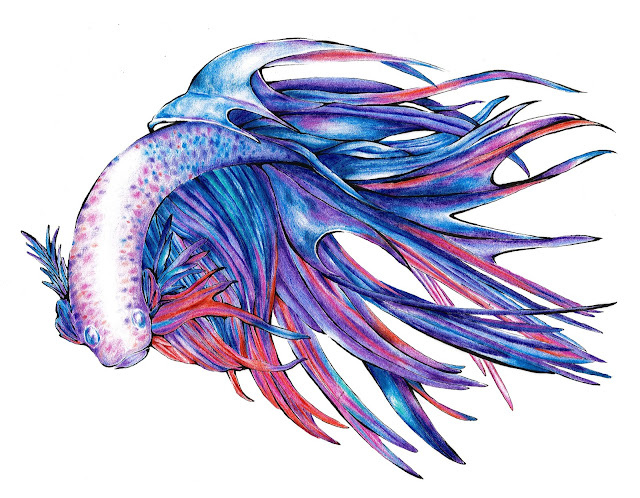 The Siamese fighting fish (Betta splendens), also sometimes colloquially known as the Betta, is a species in the Gourami  family which is popular as an aquarium fish. They are called pla-kad (biting fish) in Thai or trey krem in Khmer. They are a highly aggressive fish and it is unwise to house two males together - and even the females may kill each other.

This is a drawing of a Siamese fighting fish, they are also called Betta splendens.
I started my Siamese fighting fish drawing by doing simple pencil drawing on paper but highlighting it with ink afterwards. I wanted to put emphasis on the floating of the fins because they looked so light and beautiful and I wanted to translate those feelings onto my drawings by using intricate lines of different width and colours and shading it with different degrees of shadow. Another one of my focus was the interchanging colours of blues and purples and reds, I tried to achieve this by using colouring pencil, I did it by putting heavier colouring on some area but lighter colour on other parts. The hardest part was the fish scales because while in reality scales are the toughest parts of a fish, from a visual point of view they look very subtle and I tried to translate that subtleness by gentling hinting them with colour pencil.