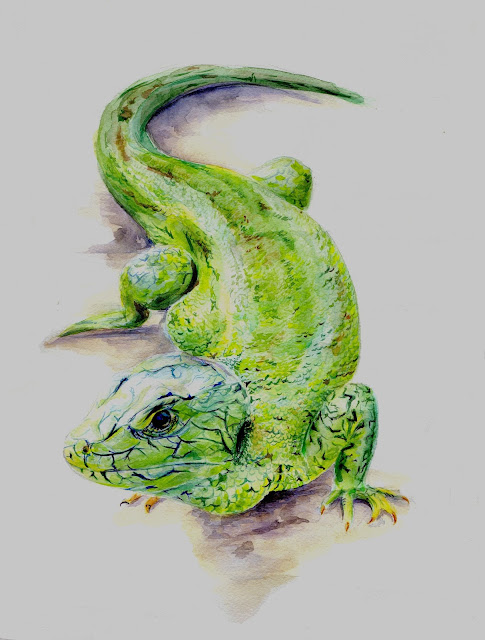 Descripción:
The European green lizard (Lacerta viridis) is a large lizard distributed across European midlatitudes from Slovenia and eastern Austria to as far east as the Black Sea coasts of Ukraine and Turkey. It is often seen sunning on rocks or lawns, or sheltering amongst bushes.
The lizard reaches up to 15 cm (5.9 in). The tail can be up to twice the length of the body, total length is up to 40 cm (16 in). As all lizards (and geckos) also the green lizard can actively lose its tail in dangerous situations, i.e. when threatened by a predator like a marten, a weasel a bird of prey or a house cat. This is called "autotomy". Beginning with the sixth, each tail-vertebra of the green lizard has a pre-prepared site of fracture. By a strong and sudden contraction of the circular tail musculature it can separate itself from a bigger or a smaller portion of the tail as need arises. Due to the still functioning autonomous nervous system of the tail fragment the detached body part does still move vigurously up to twenty minutes, thus catching the attention of the persecutor and allow the now tailless lizard to get away. Thus by sacrificing a non vital body part, in most cases the lizard succeeds in saving its life. After a while the lizard grows a new tail, however this substitute is not supported by another vertebral column but by a cartilaginous and unbreakable rod.
The European green lizard is native to southeastern Europe. Its range extends from southern Germany, Austria, eastern Italy, the former Yugoslav Republic and Greece to southern Ukraine, Romania, Bulgaria and western Turkey. It has been introduced into the state of Kansas in the United States. It is known from elevations up to 2,200 m (7,218 ft) above sea level and its typical habitat is dense bushy vegetation in open woodland, hedgerows, field margins, embankments and bramble thickets. In the northern part of its range it may be found on bushy heathland and in the southern part it prefers damp locations.