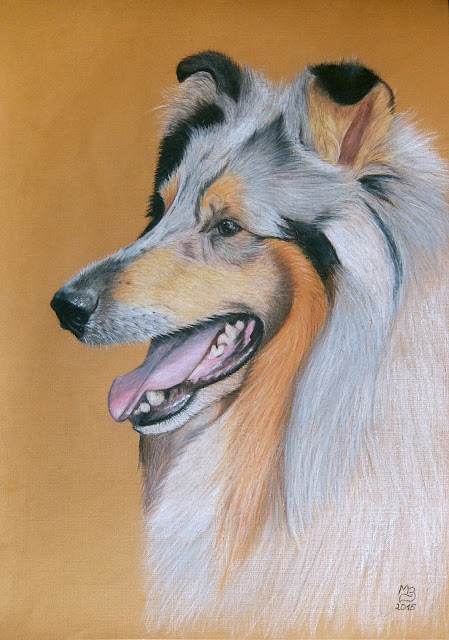 Description:
The Rough Collie (also known as the 'Long-Haired Collie') is a long coated breed of medium to large size dog that in its original form was a type of collie used and bred for herding in Scotland.

Three coat colours are recognised for Rough Collies: sable and white, where the "sable" ranges from pale tan to a mahogany; tricolour, which is primarily black edged in tan; blue merle, which is mottled gray. All have white coat areas, in the collar, parts of the leg, and usually the tail tip. Some may have white blazes on their faces. In addition, the American Kennel Club accepts white, where the dog is predominantly white with coloured markings of sable, tricolour, or blue merle on the head and sometimes body patches.

Rough Collies have a blunter face than the smaller, but otherwise very similar Shetland Sheepdog, which is partly descended from the Rough Collie. The planes of the muzzle and the top of the skull should be parallel in collies, with a slight but distinct stop. (In shelties, the planes are not parallel.) The downy undercoat is covered by a long, dense, coarse outer coat with a notable ruff around the neck, feathers about the legs, a petticoat on the abdomen, and a frill on the hindquarters.

One of the characteristic features of the Rough Collie is its head.This is light in relation to the rest of the body, and resembles a blunted wedge tapering smoothly from ears to black nose, with a distinct stop and parallel head planes. The muzzle is well rounded, and never square. There is considerable variation in the colour of the head, however. The eyes are medium-sized and almond shaped. The ears are supposed to be semi-prick, with the upper third folded over. Ears which do not 'tip' properly are fairly common, and many collies have their ears taped as puppies (using medical adhesive or paper tape) to encourage them to lay properly- no cutting or surgery is involved.