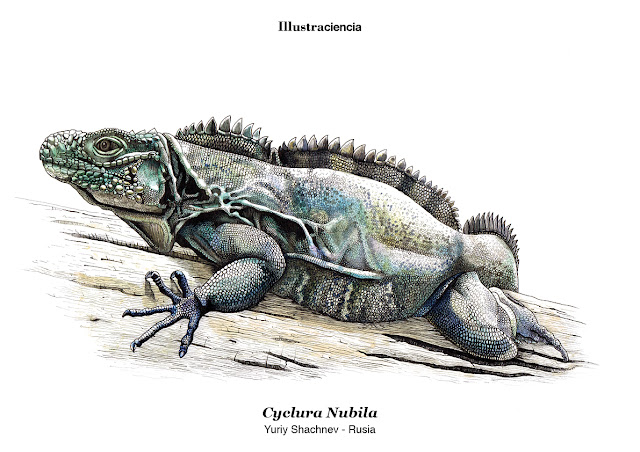 Description:
The Cuban rock iguana (Cyclura nubila), also known as the Cuban ground iguana or Cuban iguana, is a species of lizard of the iguana family. It is the largest of the West Indian rock iguanas (genus Cyclura), one of the most endangered groups of lizards. This herbivorous species with red eyes, a thick tail, and spiked jowls is one of the largest lizards in the Caribbean.
The Cuban iguana is distributed throughout the rocky southern coastal areas of mainland Cuba and its surrounding islets with a feral population thriving on Isla Magueyes, Puerto Rico. A subspecies is found on the Cayman Islands of Little Cayman and Cayman Brac. Females guard their nest sites and often nest in sites excavated by Cuban crocodiles. As a defense measure, the Cuban iguana often makes its home within or near prickly-pear cacti.

Although the wild population is in decline because of predation by feral animals and habitat loss caused by human agricultural development, the numbers of iguanas have been bolstered as a result of captive-breeding and other conservation programs.