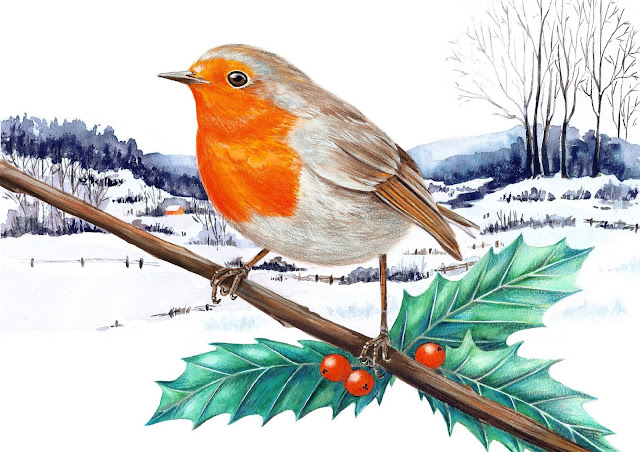 Description:
The European robin (Erithacus rubecula), most commonly known in Anglophone Europe simply as the robin, is a small insectivorous passerine bird.
The European robin is one of the most widespread breeding birds. Its song can often be heard at late dusk or even during the night.

It is found across Europe, east to Western Siberia and south to North Africa; it is sedentary in most of its range except the far north.
The term robin is also applied to some birds in other families with red or orange breasts. These include the American robin (Turdus migratorius), which is a thrush, and the Australian red robins of the genus Petroica, members of a family whose relationships are unclear.

The adult European robin is around 12–14 cm long and weighs 16–22 g, with a wingspan of 20–22 cm.
The male and female are similar in colouration. Face, throat and chest are bright red-orange, bordered with grey on the sides of the neck and chest. Crown, nape and upper parts, including wings and tail are soft brown.
The underparts are rather whitish with pale reddish-brown flanks. The legs and feet are brown. The bill and eyes are black.

The rusty-red colouring of face, throat and breast is lacking in juvenile plumage, which is coarsely spotted instead.