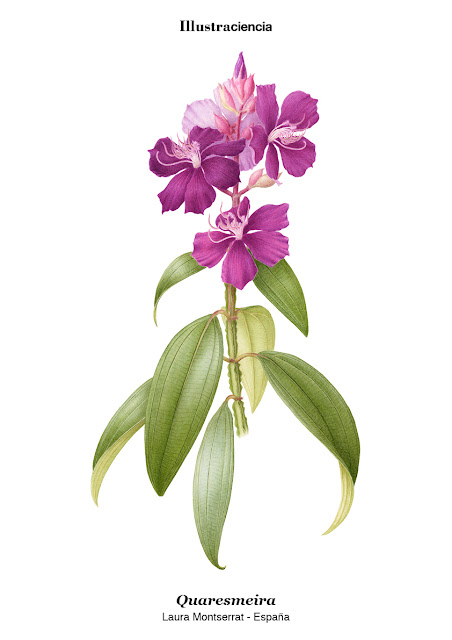 Especie:
Tibouchina granulosa
Descripción:
Tibouchina granulosa is a tree typical of the Atlantic Rainforest of Brazil, belonging to the Melastomataceae family. Also known as Brazilian Glory Tree or Quaresmeira, it is a fast growing tree and a common and important component of the native flora, particularly in secondary forests. Tibouchina granulosa is a remarkably beautiful tree that enchants for its elegance and lush flowering. It is also a highly prized ornamental, which is widely used in gardens and parks because of its spectacular blossoms with petals that vary from violet to pink. The flowers appear each year prior and during Easter. The period of lent (quaresma, in Portuguese) is an important period in the catholic tradition, from which the Brazilian common name for this tree, "quaresmeira" is derived. The tree grows quickly as much as 40 feet in its native habitat, but is usually about half that height in cultivation. The leaves are narrowly elliptic to lanceolate in shape and a dark green in color, pubescent beneath but usually smooth above. The flowers are in erect terminal panicles and each five-petaled blossom has four-angled stems. The varied-shaped stamens of this flower are visited by pollen-collecting bees.