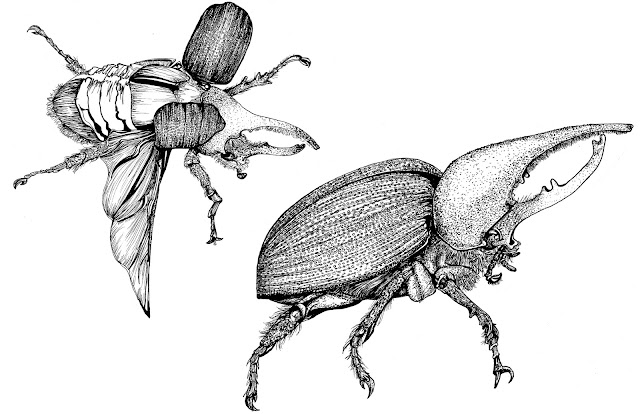 Descripción:
I chose the Rhinoceros Beetle to illustrate because I knew it would be fun to study up close. I've always enjoyed playing with beetles and this was my chance to draw one! During this process I also learned a lot about the Rhinoceros Beetle and I am even more fascinated by them now. Rhino Beetles are the largest Beetles in the world! They have two horns a thoracic horn and a shorter horn called the cephalic horn. Their horns are hollow which allows them to fly effortlessly, even though they look quite heavy. Rhinoceros Beetles mostly live on a diet of tree sap, decaying fruit and wood. While drawing the Rhino Beetle I noticed that they have hair on their legs which creates a nice contrast in texture with their smooth, shiny exteriors. This was a very fun project for me and I would like to thank you for this opportunity! Long live scientific illustration!