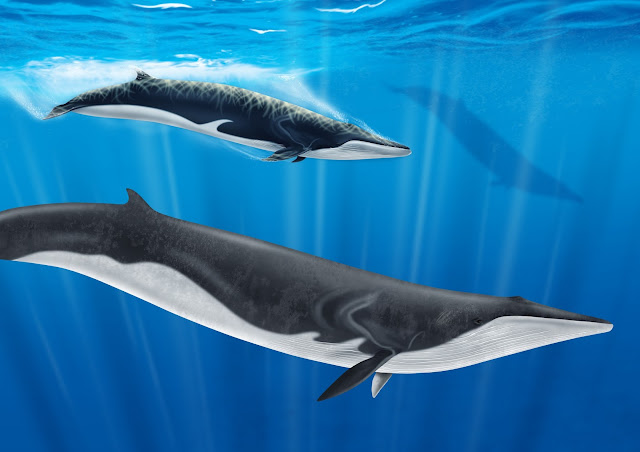 Description:
Balaenoptera physalus also called the finback whale, razorback, or common rorqual, is a marine mammal belonging to the suborder of baleen whales. It is the second-largest animal after the blue whale, the largest growing to 27.3 m (89.6 ft) long and weighing nearly 74 tonnes (73 long tons; 82 short tons). American naturalistRoy Chapman Andrews called the fin whale "the greyhound of the sea... for its beautiful, slender body is built like a racing yacht and the animal can surpass the speed of the fastest ocean steamship."
The fin whale's body is long and slender, coloured brownish-grey with a paler underside. At least two recognized subspecies exist, in the North Atlantic and the Southern Hemisphere. It is found in all the major oceans, from polar to tropical waters. It is absent only from waters close to the ice pack at the poles and relatively small areas of water away from the open ocean. The highest population density occurs in temperate and cool waters. Its food consists of small schooling fish, squid, and crustaceans including copepods and krill.