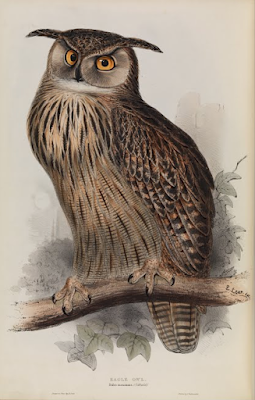 During the 19th century, John Gould (1804-81) brought to world attention the splendour of the planet's avian diversity. In an era infatuated with natural history, these gloriously modelled and coloured images satisfied the demands of passionate naturalists.

Gould was not a gifted draftsman, but he was a determined entrepreneur. He engaged a succession of superb illustrators to create 3000 sumptuous images of birds from Australasia, Europe, Asia and the Americas.

Gould used print-making media for their ability to create multiple original impressions and the etchings is his publications demonstrated precision and delicacy of line. Applying colour remained the most time-consuming part of these processes, with images painstakingly hand-coloured either on the plate or on the print.

Edward Lear, most famous for writing "The owl and the pussycat" poem, was engaged by Gould in 1832 (when he was just 20) to produce lithographs for his grand publication "The Birds of Europe". Lear had gained considerable acclaim for his recent monograph on parrots and Gould wanted only the best for this new volume. However, the pair quarrelled over accreditation of the images and the remainder of the illustrations were produced by Gould's wife Elizabeth.

Lear produced 80 bird portraits for John Gould between 1832 and 1838. His work appears in four of Gould's spectacular imperial folio volumes.