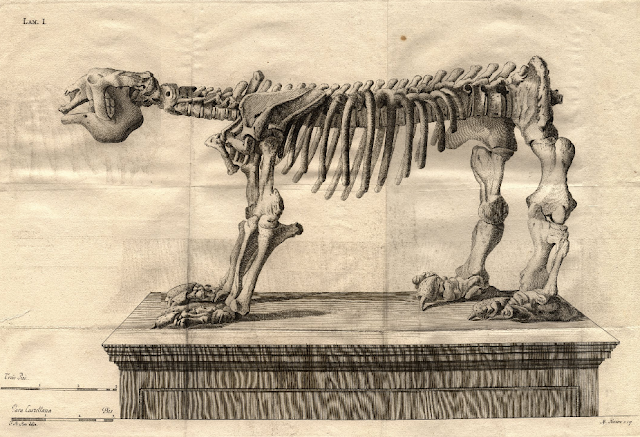 Early drawing of Megatherium americanum by Juan Bautista Bru de Ramón in 1793, first published by Cuvier in 1796. Modified from López Piñero and Glick 1993.

The megatherium is an extremely valuable piece for many reasons. It is the first skeleton of a large fossil mammal recomposed and mounted. Its remains were found in 1787 by a Spanish missionary on the banks of the river Luján in Argentina. Sent to the Royal Cabinet, the taxidermist and painter Juan Bautista Brú studied, draw and reconstructed the skeleton in the same position as it is currently exhibited. As a curious factor, it is interesting to note that this position is not correct : the animal should be in an upright position, as it is shown in other museums. But this fact does not discredit Brú's work, as it was the first time a fossil mammal was reconstructed, and this is why the MNCN has respected this position, although not real. Another aspect that has given extraordinary value to the megatherium, is that thanks to the drawings made by Brú, both of the isolated bones and of the mounted animal, the Frenchman Cuvier gave name to this species, so this specimen is the holotype of the species. Even Darwin studied this animal with Brú’s drawings, which were also sent to whom years later would become the President of the United States of America Thomas Jefferson.