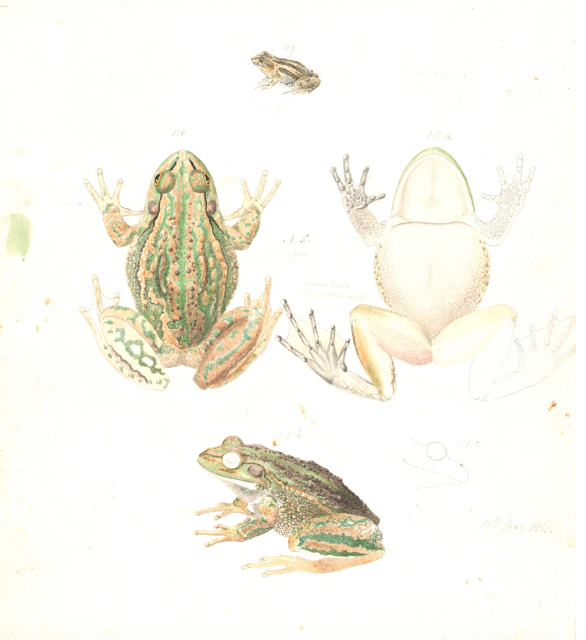 This scientific illustration by Arthur Bartholomew was commissioned by Sir Frederick McCoy, Director of Museum Victoria as part of his zoological research. It forms part of the much larger Prodromus Collection. Many of the original illustrations in the collection informed the production of the two-volume work "The Prodromus of the Zoology of Victoria", which was Museum Victoria's first major publication beginning in 1878.

McCoy would bring specimens to the laboratory adjacent to his lecture room at The University of Melbourne. They were tended and illustrated by his lecture room assistant, Bartholomew, whose delightful images of living specimens are among the collection's highlights. Bartholomew gave particular attention to the diagnostic attributes of this species, providing line drawings of the underside of the hand and foot, as well as the interior of the mouth. The Prodromus project followed a popular formula of the time, seeking to identify and classify the natural wonders of the 'new world'. Such publications reached a peak in popularity with the work of John Gould in England and the earlier work of James Audubon in America. In Australia, many professional and amateur publications, including Aldine's systematic studies of the colonies and Louise Anne Meredith's Bush Friends From Tasmania, contributed to the genre.

The publication of the Prodromus was an enormous undertaking, utilising the work of numerous artists, collectors, lithographers and publishers, over an extended period of time. Although costly in both financial and professional terms, it was met with critical acclaim and wide popular support. Financial battles were waged and lost by McCoy, but ultimately the Prodromus has stood the test of time and remains one of Museum Victoria's finest publications. McCoy died without completing his systematic study, but even at the time few believed that 'any of us will live to witness the completion of the work, if the entire Fauna of Victoria is to be illustrated.'