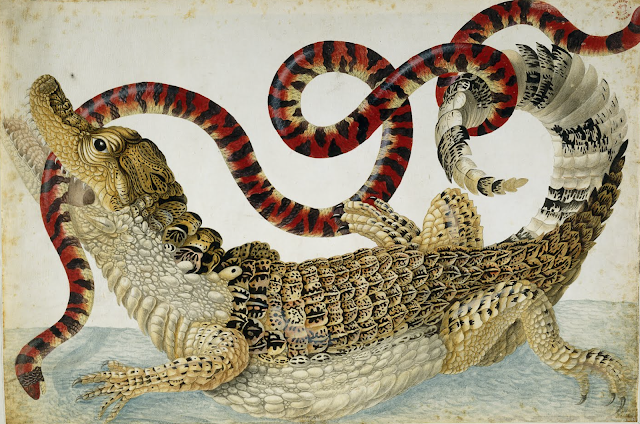 Maria Sibylla Merian (1647-1717) came from an artistic family. Her father and two half- brothers were printmakers who successively ran a publishing house of international renown in Frankfurt, and her step-father and husband were painters. She spent major parts of her life in Frankfurt, Nuremberg and Amsterdam and specialized in painting plants, animals and insects on vellum. In 1699 she travelled with her younger daughter to Surinam, a Dutch colony in South America, where she made extensive notes and sketches, and collected dried plants and animals preserved in alcohol. She returned to Amsterdam in 1701, where in 1705 she published her work on Surinamese insects, the first scientific work produced about the colony.
Merian was an unconventional figure in the late seventeenth century. Few contemporaries of either gender could match her sophisticated combination of art and science. She trained her two daughters to be equally adept natural history artists, and the present work may well be by her youngest, Dorothea, who later went on to work for the Russian Tsar in St Petersburg.