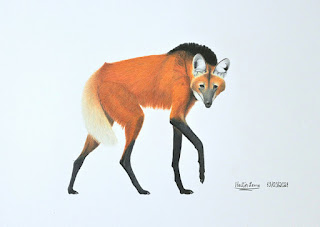 Description: The maned wolf (Chrysocyon brachyurus) is an endemic species and the largest canid from South America, reaching between 20 and 30 kg weight and up to 90 cm at the height of the withers. In spite of being called wolf and resembling a fox, it is but the only species of the genus Chrysocyon that survived late Pleistocene extinction. It is an omnivore and plays an important role in seed dispersal, especially for the wolf apple ("lobeira") Solanum lycocarpum. The "lobo-guará", as originaly called in Brazil, is a symbol for the conservation of Cerrado, a biome under great threat of destruction. It was also the animal chosen by Banco Central do Brasil in July/2020 to be printed on the country's 200 reais bill.