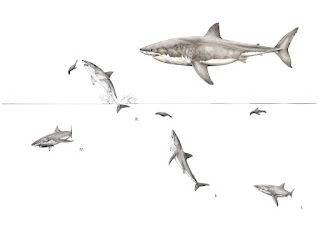 Description: The great white shark (Carcharodon carcharias) is a specie of a shark that lives in almost all seas and oceans. It has a diverse diet, including fish, sea lions, seals or even dead animals like whales. It is, not only but very common, in South African waters these animals hunting for seals. Here they show a certain hunting behavior. It is called the breaching behavior. This illustration show us how that hunting strategy works. First, the shark watch the seal from the bottom, so the shark can't be seen for it – I. Then the shark swims in the vertical towards the prey reaching speeds of 50 km/h – II. Third the tail gives him the thrust to jump out of the water enable it to catch or stun the prey – III. Finally again underwater the shark eats the seal – IV.