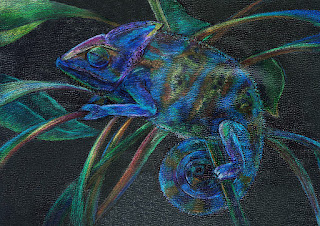 Descripción: "The ability to change color and body pattern, characteristic of all chameleons, is widely known. The color change is associated with the structural features of the skin. The oldest known chameleon was found in Europe (the find is about 26 million years old). Chameleons are probably much older than this one (more than 100 million years ago). Fossils have also been found in Africa and Asia, and it is believed that chameleons were once more widespread than they are today.
I am attracted to these animals because their danger is invisibility. They are kind of ghosts.

I specially used paper for my painting resembling chameleon skin. It has an uneven veined structure. My chameleo merges with bright leaves on which he waits for his victim."