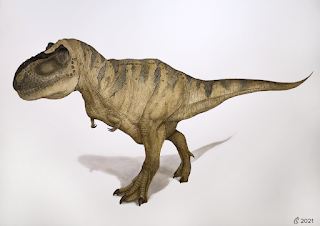 Description: Tarbosaurus Bataar lived in Central Asia at the end of the Late Cretaceous Period. It was nearly as large as Tyrannosaurus Rex and had even shorter arms. I have illustrated this Tarbosaurus with lips that covered the teeth. This is still controversial, but dinosaur skulls have structures that indicate they had lips, and being land animals their teeth would need to stay moist. It might make them look less aggressive, but they were the apex predators of their region. I have also given this Tarbosaurus a thick layer of Keratin protecting the head. Their heads would have been vulnerable when hunting, fighting, and perhaps during courtship.