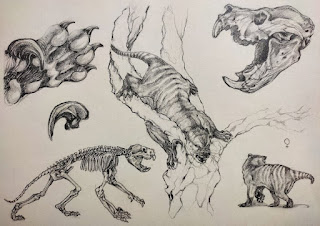 Description: The found fossils of the Thylacoleo carnifex belong to the late Pleistocene. The marsupial lion belongs to one of the largest predatory mammals. They coexisted with primitive people and, presumably, were exterminated by them. On their front paws they had strongly spaced fingers with large claws. They were used for climbing trees and for holding prey. They also had a strong bite among all known mammals.