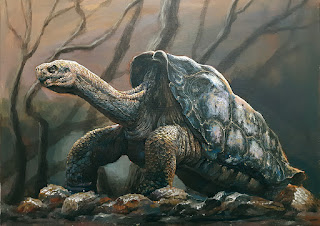 Description: In June 2012, Galapagos National Park in Ecuador announced the death of Lonesome George, the last of the Pinta Island tortoises. Scientists estimate it was 100 years old and will conduct an autopsy to determine the cause of death. Lonesome George became the rarest creature in the world without the company of his descendants and his kind. For decades, conservationists have tried unsuccessfully to breed Pinta Island road turtles with other similar female tortoises in the Galapagos Islands. George became a symbol of Galapagos Island. Its death meant the extinction of the Pinta Island tortoise. Before the end of the 19th century, there were a considerable number of tortoises on the island of Galapagos, but with the predation of sailors and fishermen and the introduction of sheep to the island,