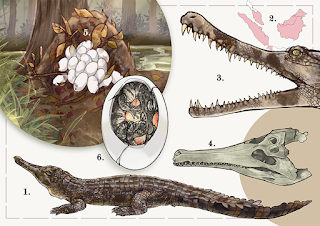 3. Having slender snout like Gharial(Gavialis gangeticus), the main diet of False Gharial was thought to be fish and tiny vertebrates, but more evidence proved that the mature adults are able to hunt on larger vertebrates including proboscis monkeys, long-tailed macaques, deer, water birds, and reptiles.

4. False Gharial has the longest skull among crocodilians.

5. Nest can be found under a tree near water source, built as a mound formed by sand, peat, twigs, dried leaves and tree seeds fully covering the eggs. 13 to 35 eggs will be laid per nest.

6. False Gharial's egg is the largest among extant crocodilians (around 10cm).