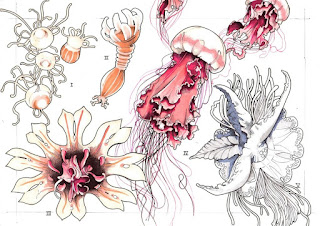 Description: The figure represents the main features of Cyanea capillata jellyfish, class Scyphozoa.
Like other jellyfish, lion's manes are capable of both sexual reproduction in the medusa stage and asexual reproduction in the polyp stage. They have four different stages in their year-long lifespan: a larval stage, a polyp stage, comprehensive of scyphistoma (I) and strobila (II) stages, an ephyrae stage (III), and the medusa (IV) stage.

The bell of the Lion's Mane is divided into eight lobes that resembles an eight-pointed star, with each lobe containining about 70 to 150 tentacles, arranged in four fairly distinct rows (V). Along the bell margin is a balance organ at each of the eight indentations between the lobes – the rhopalium – which helps the jellyfish orient itself, as well as the gonads a