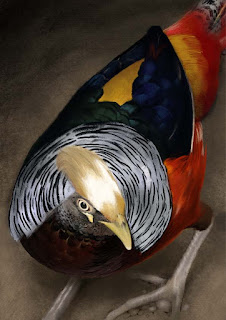 Description: The adult male Lady Amherst's Pheasant is a magnificent bird of the family Phasianidae. 100–120 cm (40-48 in.) in length, its tail accounting for 80 cm (31 in) of the total length. This pheasant sports a similar feather pattern to the Golden Pheasant but It is unmistakable with its nuchal cape white black, with a red crest. The long grey tail and rump is red, blue, dark green, white and yellow plumage. The "cape" can be raised in display. And Unlike golden pheasant it has a yellow eye, blue-green bare skin around it. The bill is horn-coloured and they had blue-gray legs.
Despite the male's showy appearance, these birds are very difficult to see in their natural habitat, which is dense, dark forests with thick undergrowth. Consequently, little is known of their behaviour in the wild.