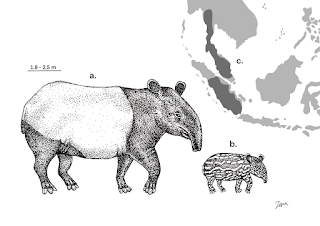 Description: a. It is the largest of the four species of tapir, weighing in at around 350 kg and 1.8 – 2.5 m in length. Adult tapirs have thick skin on the back of its neck to protect against predator attacks.
b. The calf has black and white stripes to camouflage against predators which goes away within 5-6 months.
c. The Malayan tapir is also known as the Asian Tapir as it is the only species of Tapir in Asia. Its habitat is located throughout the tropical lowland rain forest of Malaysia, Thailand, Indonesia, Vietnam. Cambodia, Laos and Myanmar. The species is listed as Endangered on the IUCN Red List since 2008 with approximately 2,500 mature Malayan tapirs left.
Source: Tapir.org | Zoo Negara Malaysia