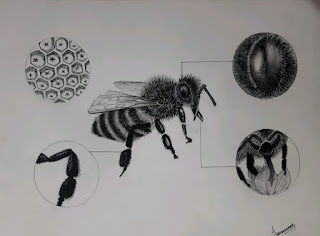 Description: Apis mellifera
This illustration depicts an A. mellifera which is a native to western Asia, Europe and Africa. After the introduction of this species of bees to the other parts of the world by humans, they are now found everywhere. Each eye of an A. mellifera consists of thousands of individual lenses. They can detect ultraviolet light reflected by the flowers which guide them while landing. The proboscis of A. mellifera is used to detect the sucrose present in the nectar, suck the nectar and also in comb building. A. mellifera has 3 pairs of legs which are used for different purposes like, the hind legs are used for pollen accumulation. The bees make a honeycomb which consists of hexagonal cells made of beeswax secreted by special glands of the worker bees.