Vladimir Nikolov - To the Nest 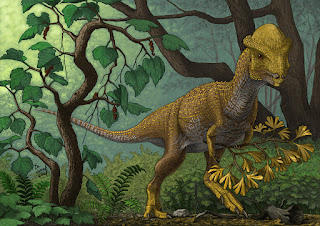 Description: A life reconstruction of the pachycephalosaurid Stegoceras validum. The animal is depicted in the speculative behavior of collecting plant material for its nest (could be for building the nest itself, or to support the incubation of the eggs with the heat released by the rotting leaves). Stegoceras lived in North America during the Late Cretaceous (Campanian age). The depicted flora is based on paleobotanical data for the Dinosaur Park Formation, where Stegoceras fossils have been found, although the appearance of any specific plant is generalized interpretation based on the specifics of the taxonomic group it belongs to.